The special weapons course, was a great success covering an array of traditional karate weapons including the bo, tonfa, sai and nunchaku. What follows is a brief summary of the course and the weapons covered.

I have now been to a few of Sensei Cummin’s weapons courses and so at last I am beginning to feel comfortable with the bo but am not that familiar with the other weapons covered. I started the class at the point where Shushi No Kon, the first Bo kata was being taught. I was pleasantly surprised to find that I remembered a fair part of the kata since the last course (although I had only practised a few times in between) and so felt a bit more confident in performing the kata rather than the more hesitant  feeling from previous courses. Shihan Cummins went through the kata a few times starting slowly and going through every move at a slow speed so that those attending who had not used the bo before or had only used it one or two times could follow and slowly increased the count speed until by the end of the class everyone was performing the kata at a good pace. This all took place at various points during the class with the other weapons interspersed in between. Shihan Cummins also explained how the moves of the kata could be applied and then held a question and answer session so that the students could clarify the parts they were unsure of which was very informative as Shihan Cummins explained the details of the application relating to the questions and the history where applicable.

Sensei Austin Birks took the class through the use of the nunchaku, this was only the second time I have used them and thanks to Sensei Sue Hession generously donating her time to purchase weapons on behalf of myself and others on the class now had my very own pair to use. Whilst the first time I had used them they seemed to flow naturally for me, this time this was not the case initially and it took some time to be able to get a rhythm going when swapping hands. This is definitely a weapon for which practice is a must to be able to use them in any capacity and you will almost certainly hit yourself a few times whilst doing so. Sensei Birks then demonstrated how these could be used in defence against attacks from weapons or the empty hand before giving a demonstration of the nunchaku in which he would have given Bruce Lee a run for his money in that famous scene from Enter the Dragon.

Shihan Cummins returned to the helm for the Sai, explaining the origins of the weapon, and demonstrating their use in kata and kumite which in many ways is similar to that of the Tonfa and how they were traditionally used to defend against attacks by katana (Japanese swords). We all then tried to use these which again was a second time for me. I still haven’t got to grips with the sai finding it very hard to spin them with any consistency. Shihan Cummins emphasised the importance of having the blade running along the arm when performing blocks in a similar manner to when using a tonfa. He then held a question and answer session about the sai in which the students again asked questions and Shihan Cummins explained the usage and techniques.

The weapons course finished with a last performance of Shushi No Kon to the count followed by Sensei Sue Hession demonstrating the kata at full speed.

As always this was a very informative course with the attendees all asking for more courses in the future. I would recommend that anyone who hasn’t tried weapon training to attend any future course as it really does add a new dimension to your training and helps when interpreting some of the advanced kata such as Bassai Sho and Jitte. 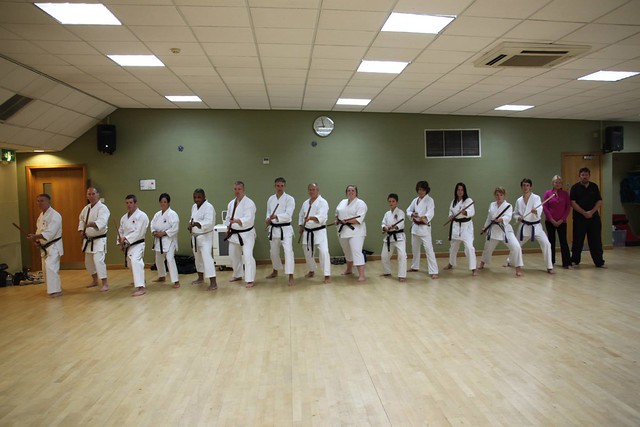 Sensei Cyril Cummin’s continued his kobudo (weapons training) sessions with a course featuring the Bo, Sai and Nunchaku. What follows is a brief summary of that course.

The course started with the bo, as this has featured in a number of courses I felt that I was now coming to grips with the use of the bo and when we revisited the bo kata shushi no kon I now felt reasonably comfortable doing it. This was reflected with the rest of the class who had all participated in some of the previous sessions and it felt more like revision and polishing the techniques rather than trying to remember what came next for the most part.

After the Bo we moved onto the Sai, Sensei Cummins explained the history of the weapon before demonstrating its use. We all then attempted to perform basic techniques with the sai. Personally I found the sai extremely difficult to handle especially when swivelling them and as a result found even performing kihon kata with the sai a challenge.  This seemed to be reflected with most of the class and Sensei Cummins with he help of Sensei Susan Hession slowed down and helped everyone understand how to swivel and manipulate the sai.

After the sai came the nunchaku, again Sensei Cummins explained the history of the weapon and demonstrated a number of ways in which they could be used. Then we all had a go. I found the nunchaku easier to handle than the sai and fear of hitting myself in the face with the wooden nunchaku I was using soon evaporated. Whilst I wont claim to have replicated that famous scene from Enter the Dragon, I was able to swing the nunchaku around myself and swap hands and arms with relative ease.

Finally we partnered up and participated in some basic sparring defending attacks from a bo with the sai and counter attacking. This was interesting and felt far more difficult than using the tonfa in a similar situation to me.

Alas time was up and another very informative kobudo session concluded. I look forward to the next one as everyone else who attended also indicated and hope to practice more with the weapons covered so far.

A selection of photos from the course can be found on our Flickr album here.